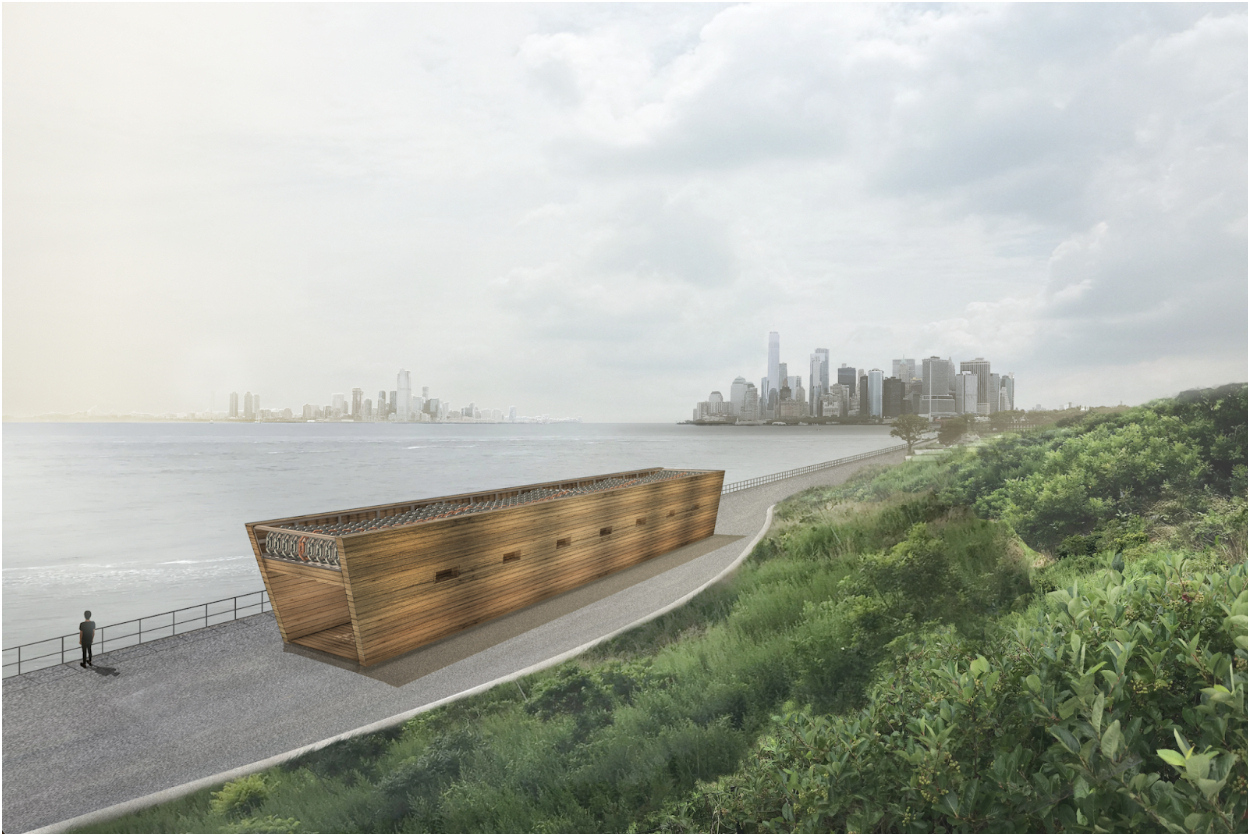 The American Manifest (above), the first public art exhibition of Los Angeles-based artist Charles Gaines, will debut in New York’s Times Square on July 13, featuring performances and sculpture. The three-part project will also include a monumental sculpture installed on Governors Island in New York (October 2022) that will travel to the banks of the Ohio River in Cincinnati, Ohio (Summer 2023). Presented by Creative Time, Governors Island Arts, and Times Square Arts, the exhibition explores the role of the waterways of New York and Cincinnati in both “upholding slavery and securing liberation, a duality that challenges reductive narratives of the history and legacy of slavery in America.” Introducing the project Gaines said: “By exploring the Dred and Harriet Scott Decision, The American Manifest is intended both critically and poetically to unpack the complexity of America’s humanist ideals. It is intended to take us through the slippery contradictions that make up the American narrative.” | More

French artist Paul Maheke will present a performance titled “A fire circle for a public hearing” on the High Line (June 28, 29, and 30), the elevated public park that stretches from the Meatpacking District to Hudson Yards in New York City. The event marks the first U.S. presentation of the performance and Maheke’s first public performance in New York. Featuring three performers, the work extends the artist’s “ongoing engagement with the potential of the body as an archive; the performance addresses how history, memory, and identity are formed.” | More

The DuSable Black History Museum and Education Center has a new name and a new visual identity.

The DuSable Museum of African American History announced a new name on June 18. Founded by Margaret Burroughs in 1961, the Chicago museum is now called The DuSable Black History Museum and Education Center. The change includes a new logo and visual identity expressed throughout its signage and a refreshed website. “While The DuSable is an iconic and historical institution, we’re also constantly evolving to reach new audiences here at home and across the world,” Perri Irmer, president and CEO of The DuSable Museum, said in a statement. “Our new name and new visual identity further reinforce our founder’s commitment to preserve and promote Black history, art and culture, and to educate and inform our visitors, especially during these challenging times. This is a tremendous moment for The DuSable—we don’t just preserve history, we make it, too.” | Chicago Sun-Times

Envisioned by Opal Lee, forthcoming National Juneteenth Museum in Fort Worth, Texas, spans 50,000 square feet and is expected to open in advance of Juneteenth holiday in 2024. | New York Times

Louise Bernard, museum director at The Obama Presidential Center in Chicago, answered a wide-range of questions providing a preview of the Chicago institution expected to open in 2025. | ARTnews 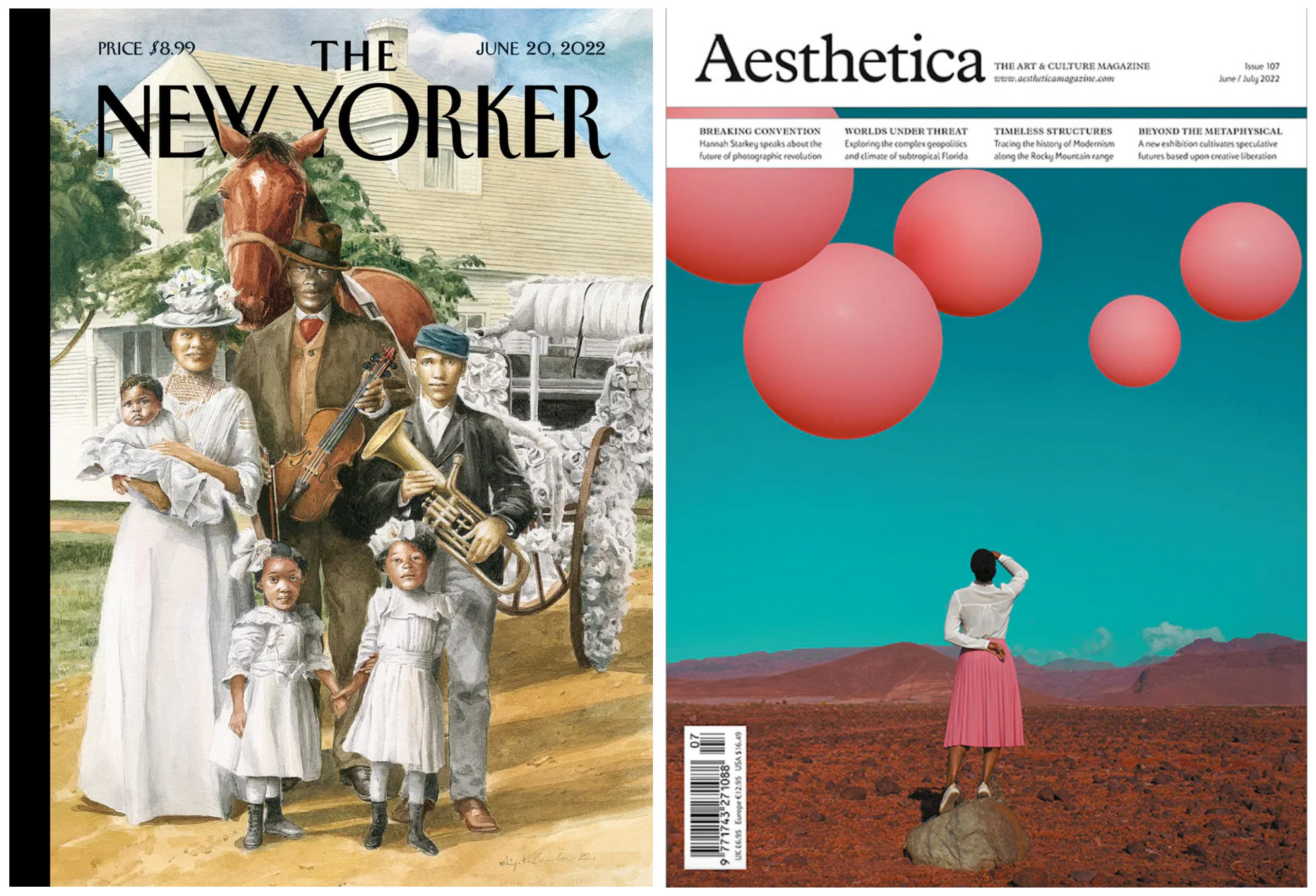 “What I like to do,” Elizabeth Colomba said, “is to insert Black bodies into historically white spaces and thus into the canon of painting.” For her first cover of The New Yorker, the French-born, Harlem-based artist made a historical portrait. The watercolor image for the June 20 issue is titled “157 Years of Juneteenth” and features a family wearing their Sunday best standing before a flower-embellished, horse-drawn buggy, a traditional element of Juneteenth celebrations. | More

The latest issue of York, UK-based Aesthetica magazine features Nod to Surrealism, a portfolio of self-portraits by Spanish photographer Fares Micue. Her work also graces the cover of the June/July 2022 issue. More

On June 20, Vice President Kamala Harris made a surprise visit to the Smithsonian’s National Museum of African American History and Culture in Washington, D.C., where she spoke briefly with elementary school students and their parents about Juneteenth. | UPI
CT

Art Industry News: The Hair Stylist Who Creates Anna Wintour’s Signature Bob Is Literally an Artist, It Turns Out + Other Stories