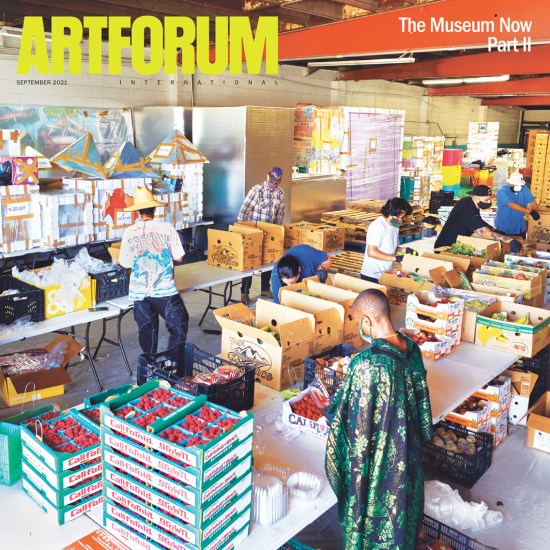 Artforum, September 2021 | Lauren Halsey’s Summaeverythang Community Center: Thinking about change in the museum field and what the next generation of art institutions looks like, Thelma Golden cited a few artist-created projects, including Lauren Halsey’s Summaeverythang, which is located next door to her studio in South Central Los Angeles. Halsey is an alum of the Studio Museum in Harlem’s artist-in-residence program (2014-15).

The food program developed by artist Lauren Halsey and her Summaeverthang Community Center team, graces the cover of the September issue of Artforum. Inaugurated in March 2020, at the start of the pandemic and subsequent quarantine, the program brings organic produce from nearby farms to residents of South Central Los Angeles, free of charge. Inside, the magazine explores how artists, curators, and historians are rethinking museums. Part of that coverage includes a fascinating and wide-ranging, must-read roundtable discussion about the Studio Museum in Harlem with Director and Chief Curator Thelma Golden, former director Lowery Stokes Sims, and former curators Naomi Beckwith and Thomas (T.) Jean Lax, moderated by Artforum’s editor-in-chief David Velasco.

The title of the intergenerational conversation, “Street, Stoop, Stage and Sanctuary,” is drawn from the brief Golden gave architect David Adjaye for the design of the museum’s new building, which is currently under construction on 125th Street. “I wanted the building to reflect four Harlem experiences. The experience of street life. The experience of the stoop, the meeting of interior and exterior life. The experience of the stage and the way we understand the performative in the creation of identity; we are one block east of the Apollo Theater, the cathedral of Black music,” Golden said. “And then the experience of sanctuary. Harlem community is defined by the relationship to houses of worship. Churches, yes, in the Black American religious tradition, but also mosques and the practices of our African and Caribbean brothers and sisters, whether voodoo, Yoruba, or the like. So: the street, the stoop, the stage, and the sanctuary. The building is not just about the experience of the museum, it’s about putting art and culture in the center of this larger conversation.” 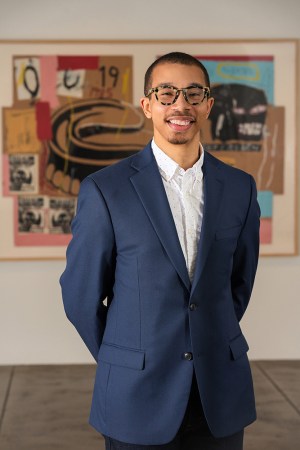 The Andy Warhol Museum in Pittsburgh, Pa., appointed Tyler Shine (left) assistant curator of art. He joined the museum Aug. 31. Shine was a graduate lecturer at the Institute of Contemporary Art at the University of Pennsylvania. He was also a graduate teaching fellow at Penn, where he is a Ph.D. candidate in the history of art. Previously, Shine was the inaugural Constance E. Clayton Fellow at the Philadelphia Museum of Art (2016-18) and a museum assistant at The Phillips Collection in Washington, D.C. (2013-15).

The Julia Stoschek Foundation announced its first ever advisory board. The five members include Los Angeles-based artist Arthur Jafa. Established in 2017, the German foundation supports the Julia Stoschek Collection of time-based art and has locations in Düsseldorf and Berlin. In 2018, Jafa’s first exhibition in Germany was presented at the foundation’s Berlin space. “Arthur Jafa: A Series of Utterly Improbable, Yet Extraordinary Renditions” featured the artist’s work in conversation with Ming Smith, Frida Orupabo, and Missylanyus.

Francesca Harper is the new artistic director of Ailey II, the second dance company of Alvin Ailey American Dance Theater in New York. A dancer, choreographer and director, her experience spans ballet, Broadway, and the Dance Theater of Harlem. Growing up, Harper attended classes at the Ailey School, where her mother, Denise Jefferson, served as director, from 1984 to 2010. Following in her footsteps, Harper has taught at the Ailey School for more than two decades. In 2005, she founded the Francesca Harper Project, a nonprofit “dedicated to creating groundbreaking dance, music, and theater works.” She will give up the project to take on her new role. She starts at Ailey II on Sept. 9. | New York Times 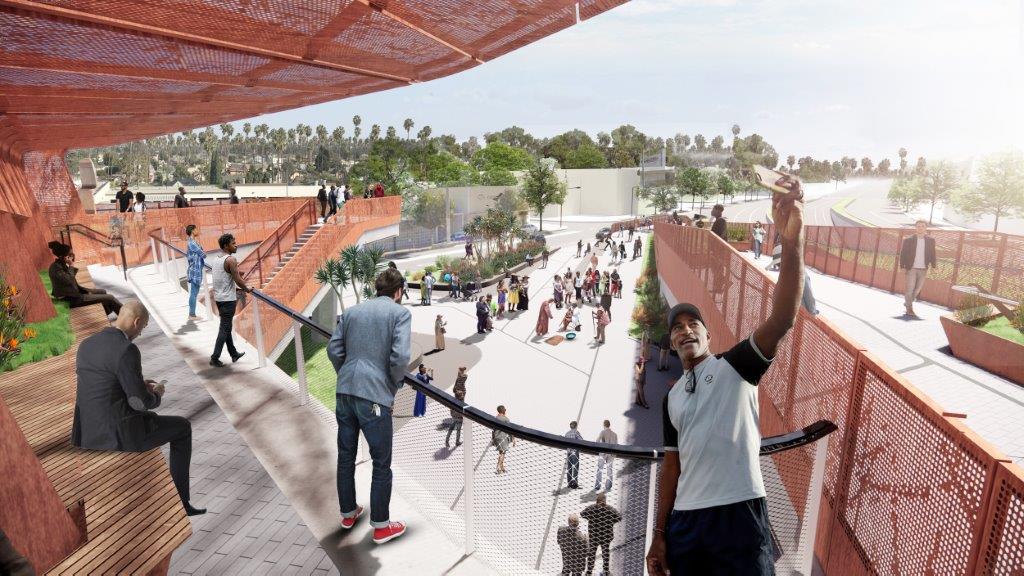 Along the Crenshaw corridor, Sankofa Park is the site of a forthcoming monument by Kehinde Wiley. | Courtesy Destination Crenshaw

In Los Angeles, Destination Crenshaw is commissioning 100 artists to create outdoor artworks along a 1.3 mile stretch of Crenshaw Boulevard. The first group of seven artists will produce sculptures. Designs by Charles Dickson, Melvin Edwards, Maren Hassinger, Artis Lane, Alison Saar, Kehinde Wiley and Brenna Youngblood are expected to be submitted for review and approval to the city’s Cultural Affairs Commission in October. The $100 million public-private project is billed as “the largest commissioned initiative ever undertaken for Black artists.”

The Milwaukee Art Museum commissioned Derrick Adams to create a new mural installation. The Brooklyn artist is taking inspiration from The Negro Motorist Green Book. Paying homage to the city’s Black cultural sites, the project will also reference civil rights era photographs and figures from Romare Bearden’s 1971 collage “The Block.” Titled “Our Time Together,” the 93-foot-long project will be unveiled Oct. 29 and remain on view through 2024. 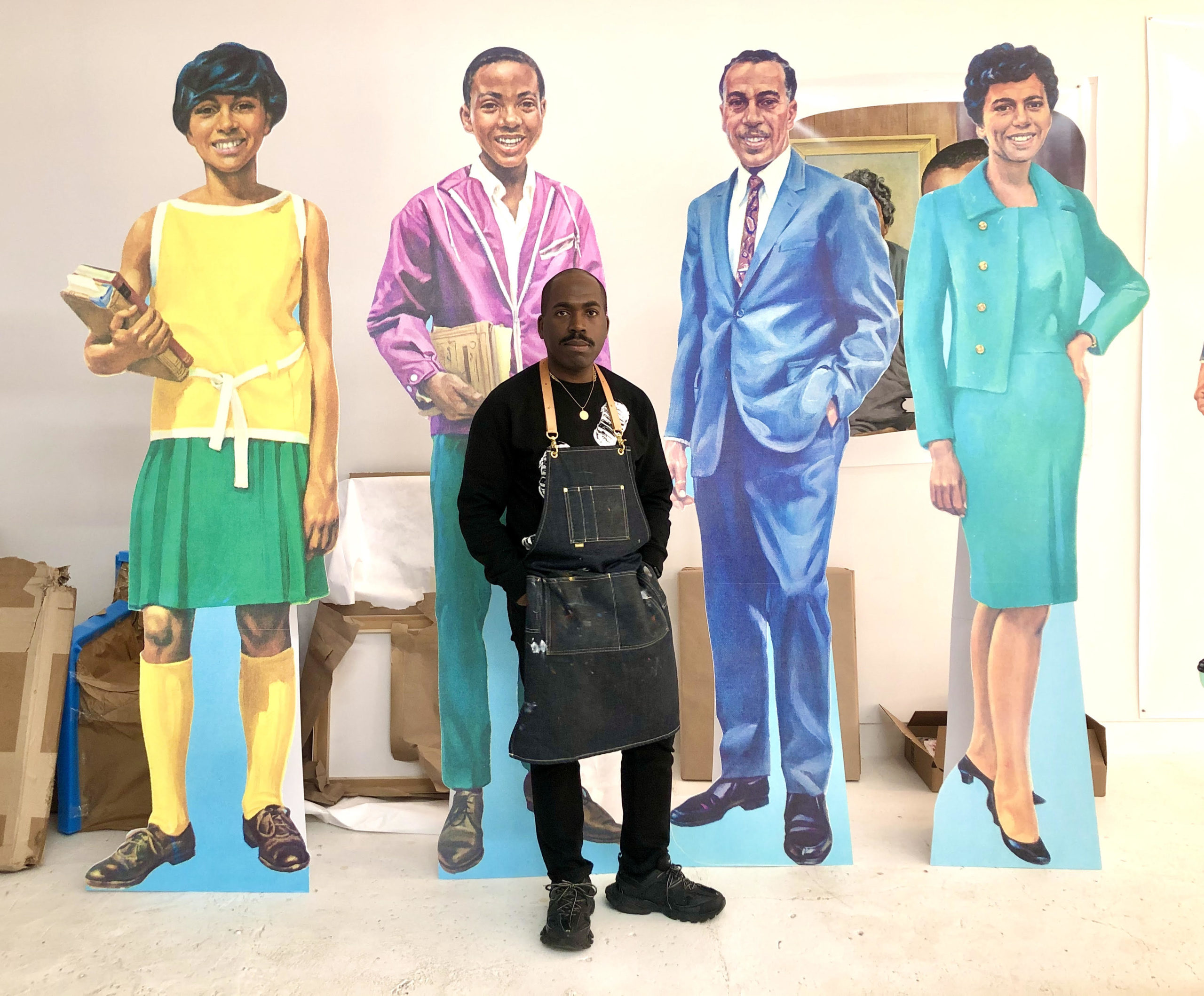 In Chicago, Theaster Gates is launching Dorchester Industries Experimental Design Lab, a three-year incubator for emerging and established designers of color in the fields of furniture, fashion, architecture, industrial arts, and graphic design. In partnership with the Prada Group and Gates’s Rebuild Foundation, the program will invest in the development of the designers, providing creative and networking opportunities. Participants will be nominated by leaders across design disciplines and receive financial support through the Design Lab Awards. The first cohort will be announced in October. Gates has collaborated on previous projects with the Italian brand. The Prada Foundation in Milan has hosted two solo exhibitions with Gates “True Value” (2016) and “Black Image Corporation” (2018-19). In 2019, Prada announced Gates and Ava DuVernay would co-chair a new diversity council formed after the luxury brand pulled from its boutiques handbag charms featuring monkeys with big red lips in the wake of public outcry declaring the products racist. | Architectural Digest

Zeitz Museum of Contemporary Art Africa (Zeitz MOCAA) and the University of the Western Cape announced a yearlong fellowship program designed to train the next generation of museum professionals in Africa. Citizens of African countries may apply. Five successful candidates will enroll in courses at the university and gain work experience at the museum in multiple departments, including curatorial and collection management. The program is based in Cape Town, South Africa, and covers the “costs of tuition, accommodation, basic health insurance and a monthly stipend. Travel and visa costs are not included.” Deadline to apply is Sept. 30, 2021. (Only the first 200 applicants will be considered.) | More Info

Applications are open for the Henrike Grohs Art Award. Presented by the Goethe-Institut and the Grohs family, the prize recognizes talented young artists on the African continent. The winning individual artist or collective receives a cash prize of 20.000€ (about $24,000) and 10.000€ toward funding a publication. Submissions close Sept. 17, 2021. | More Info
CT

“MEGA SUPER NOVA ULTRA” by SPEKTR and Hot Singles in Your Area in Omsk, Russia – StreetArtNews